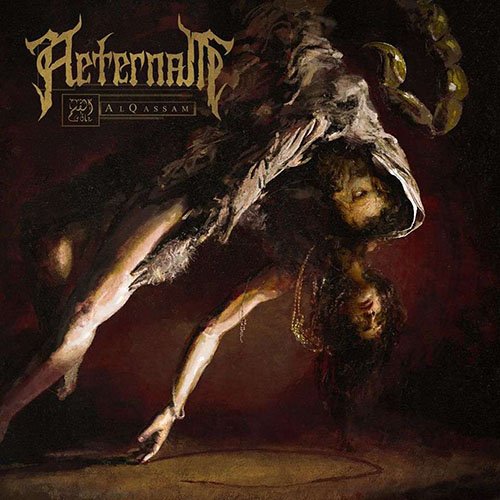 AETERNAM is a band from Canada that you just cannot easily put under a label. One could say that they play a kind of modern Death Metal, with oriental, folk elements and progressive passages at the same time, which is very melodic, symphonic and epic. The influences from SEPTIC FLESH, ORPHANED LAND and MOONSPELL are there, following what AETERNAM want to do, which will sound refreshing for the extreme genre for sure.

Since the Canadians are obviously influenced by a big variety of Metal genres, extreme and not, the main question one could ask is, if the bond in all these aspects is here. The answer is yes, the whole album blends in harmoniously, we could say. All those folk elements really add something to their already great music. The vocals are fierce, sometimes clean too, but no more than they should be. Like a Metal melting pot, which you don’t know where it will take you and where it will hit you in the next second, it enchants us and takes us to other places all over the world. In the Middle East and Arabia for the most part, in third-century Syria with “Palmyra Scriptures”, during “Bringer of rain” in ancient Rome, then away to Japan with “Celestial Plains” and during “Poena universi” in the ancient world of Latin America.

In the first track of the album, AETERNAM takes us on a journey through the ancient world of Arabia. The lyrics are written in traditional Arabic and are inspired by a Middle Eastern black magic book. It is a spell of invocation, which aims to make a pact with the ancient Demon, Al Abyad. We hear extreme sounds, blastbeats, but also more mid tempo passages, all through a magical symphonic orchestra. In “The Bringer of rain”, we encounter a wild beginning with groovy spots, a beautiful chorus, grafted with enough melody and Death Metal riffs that become melodic in the progress. There is also an excerpt from the movie “Gladiator”, in the end of this track. Next is “Lunar Ceremony”, a heavy / progressive track, symphonic metal with an enchanting chorus and clear vocals. “Ithyphalic Spirits Of Procreation”: a MOONSPELL like outburst with oriental sounds, a pure symphonic extreme piece. Next is “Palmyra Scriptures”, a song that talks about Queen Zenobia and is their most melodic piece, strongly influenced by the Arab tradition, in which the band tosses away any of their Metal elements since it is completely soft / ethnic with ORPHANED LAND’s Kobi Farhi participating, a song which you definitely have to have an open mind in order to be able to listen and like. From there, we get to travel with one of the most epic tracks they’ve ever written, “Hanan Pacha”, with intense progressive elements and a quick and extreme Death outburst in the process. A trip to ancient Japan with “Celestial Plains” is next, this is one of the most symphonic tracks on the album, in which their orchestrations have the necessary Japanese vibe, as they begin with shakuhachi and shamisen and the most extreme elements complementing it. This is followed by an extreme, more classic Death Metal track in “Ascension”, with an oriental mid tempo passage. The album closes with the enchanting “Poena Universi” giving us a ride to ancient Peru through this symphonic progressive extreme metal piece. In the magical world of Ziggurat, a dramatic operatic beginning leads to an intensely extreme SEPTIC FLESH like sound, intense bass in the intermediate rhythmic riff and a beautiful melodic solo in between.

With this release, AETERNAM is preparing themselves for the extreme (and not only) metal album of the year from now and they are really enriching the extreme sound with symphonic, progressive, epic, folk elements, leaving us wondering who and how will be able to surpass them. Utu, the ancient God of the Sun and Justice of Mesopotamia, throws a spell to help Aeternam finally get what they really deserve: Recognition.