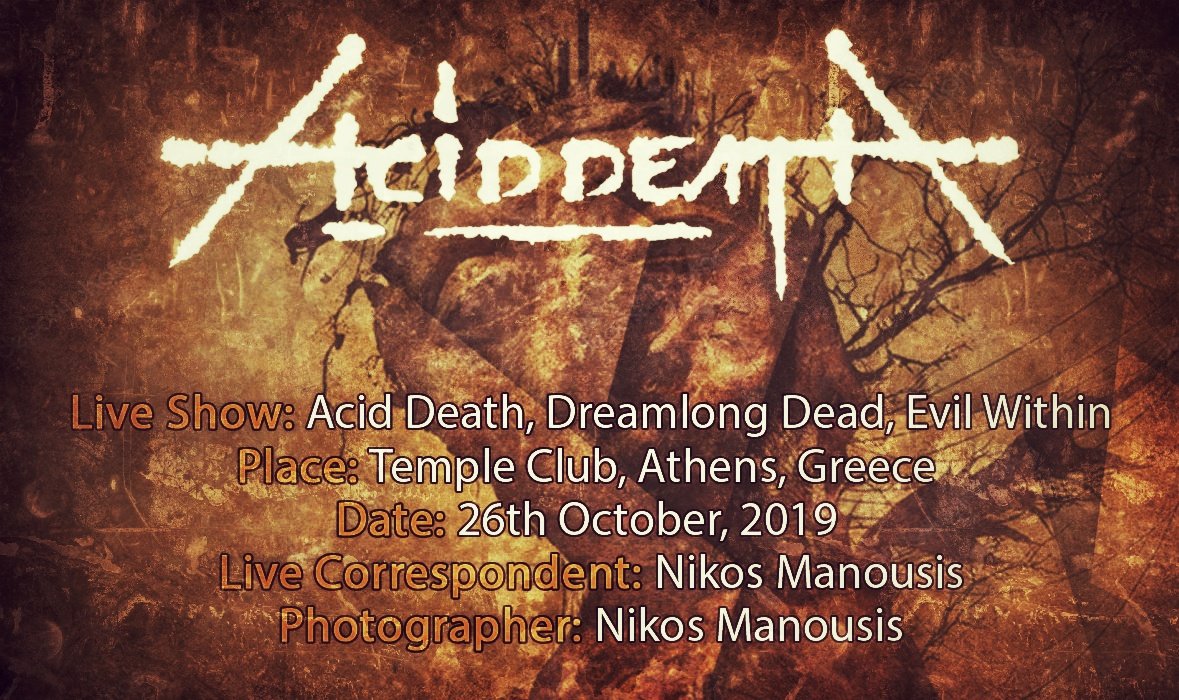 A festive live show on the 26th of October, 2019, at the Temple Athens Live Club, with ACID DEATH celebrating their 30 years of existence. Athens was the final stop of the “Alive And Still Kicking 30-Years Anniversary Greek Tour”, and, besides ACID DEATH, we would have the opportunity to enjoy DREAMLONG DEAD and EVIL WITHIN as special guests.

A little bit before 21:00 EVIL WITHIN took the stage, a band that had released their debut album entitled “Darker Than You” a few months earlier. They play mainly Death Metal with a few Doom/Black elements and some symphonic parts. They were full of spirit and energy and performed very well, despite the awful sound. The joined male and female vocals created a very nice atmosphere. They played five original songs, plus a cover of “Vetry Zlye” by ROTTING CHRIST.

The next in line were DREAMLONG DEAD, who managed to level the “Temple” to the ground. Uncompromised, full throttle Death/Doom Metal that dragged us into a merciless headbanging. The sound had improved significantly, however, due to a problem with the microphone, Yannis and Tasos (they share the vocals) had to share the same microphone, but it seemed that they were not at all affected and performed flawlessly! They were quite laconic and they had a very nice lighting effect during their set which was reminiscent of post metal concerts. DREAMLONGDEAD were torrential from the first minute of their show until the last. They said goodnight with an amazing cover of “Call From Grave” of the Titans, BATHORY. I look forward to seeing them again….

It was almost 23:00 when ACID DEATH, the headliners of the event, went on the stage, right after we watched on the screens of the club a video of memorabilia and photos from the 30 years old career of the band. It was a very nice and touching gesture from the band that woke up many memories, especially for the older fans. When the video ended, the party started with “My Bloody Crown” from their outstanding latest album, “Primal Energies”. They went on playing for almost an hour and a half, with songs from their entire discography, even from the split single they released in 1994 with the Spanish death metal band AVULSED. We also had the privilege to hear live the fantastic song “Our Shadows” from the album “Pieces Of Mankind” and they concluded their show with “Apathy Murders Hope” from their first monumental 7” EP from 1993. The band delivered an amazing show, full of passion and energy, honouring all their albums and proving the reason why they continue to sit for 30 years straight on the throne of the genre in Greece! And we are very thankful for that!!