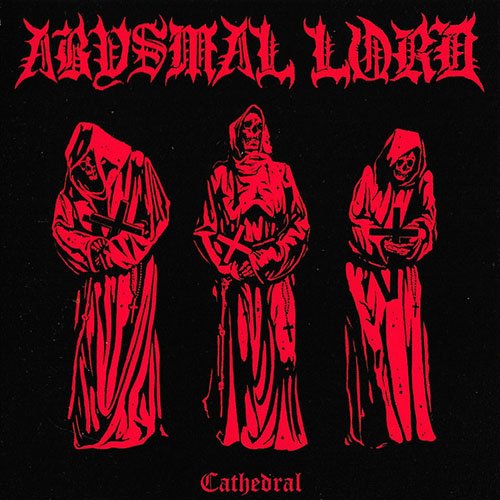 Concerning the underground War Metallers ABYSMAL LORD from New Orleans, we had been talking about, a year ago, with the release of their mediocre full length “Exaltation Of The Infernal Cabal”. So, they returned this year improved, with a new barbaric EP entitled “Cathedral” which consists of five compositions with only ten minutes total duration!

The compositions now have a coherence even in their chaotic Blackened Death sound while the influences by the great BEHERIT and the Spanish PROCLAMATION (especially in the sound of the drums) are more than obvious. All songs are in a fast tempo rhythm, a fact that is reflected in the short duration of the album. The rotten sound on the bass with the blastbeats give the necessary “swampy” outcome at the songs, while the sinister grows by M.C. on vocals sound as if they come out of the darkest caves of hell.

“Cathedral” is a brutal attack with strong compositions and improved production comparing to “Exaltation Of The Infernal Cabal”, so it will satisfy all fans of the specific sound. ABYSMAL LORD has worked, improved and I hope they will continue at the same paths in the future, as their new release vindicates their effort so far…

Entrails – Rise Of The Reaper