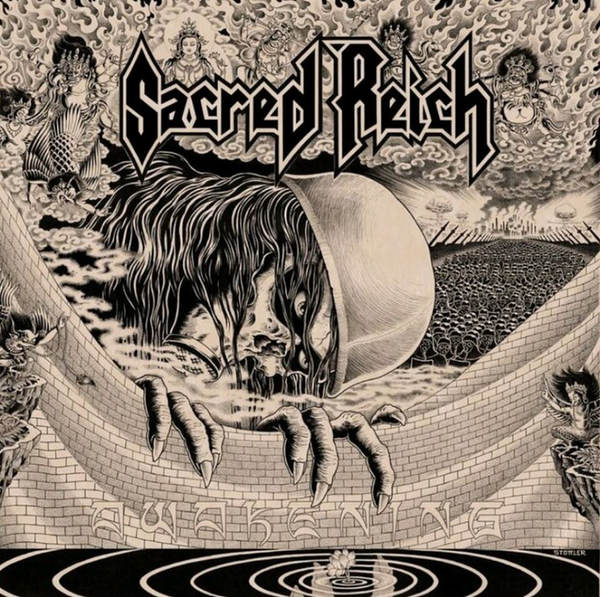 Good news! Although SACRED REICH had previously ruled out the possibility of a new album, the band after 23 years returned with a new release. SACRED REICH’s latest album “Heal” was released in 1996 and that year drummer Dave McClain left  the band to become member of MACHINE HEAD. Then, in 1997 they’ve released the live album” Still Ignorant ” and immediately broke up. In 2006, they’ve reunited playing several live shows without the prospect of a new album. In 2018 drummer Dave McClain returned to the band and rumours started about a new album! Also in 2019 they added Joey Radziwill as a new guitarist ,because the original guitarist of the band, Jason Rainey has retired for health reasons.

The whole album lasts 30 minutes with eight songs. The band’s sound has not changed at all since the 90’s. Also the production is old-fashioned, giving a heavy groove in the album’s sound. The band has not emphasized in speed, however they’ve composed groove-thrashy riffs with an excellent work in songwriting. Rind’s performance on vocals is fantastic as if time didn’t touch him at all! The album brings out an old school feeling with uplifting rhythms and energy. “Awakening” presents a lot of variety and ideas, e.g.in “Salvation,” we find melodies influenced by Iron Maiden, in “Death Valley” and “Something To Believe” appear hard and stoner rock elements. Also” Divide and Conquer “and” Manifest Reality” are two of the best Thrash Metal songs the band has ever written!

SACRED REICH came back dynamically with an honest and dignified record that stirs you up and lasts as long as it needs to keep you away from getting tired. I hope that the band, even now, after all those years of existence, will gain the recognition it deserves. SACRED REICH (who still are great live), 23 years later remain true to their roots and offer us “Awakening”, a record that the band should have released after “Independent” album!

Grima – Will Of The Primordial